I can't tell if there's a problem with the hard drive or with the Catalina update, but I'm having random restarts and then yesterday recovery couldn't find the hard drive. Things seem fine today. I've disconnected my Time Machine USB hard drive so that it doesn't corrupt a backup.

I'm having trouble determining whether the issue is the hard drive or software. I've already run Disk Utility checks and it says everything's fine. I have the 1TB drive that came with the Mac and it was about 70% full but I got it down to 50% yesterday before it went unresponsive for a while. I don't know if those things are related. I'm just unable to determine the problem.

Is there somewhere in software on the macOS that I can see what happened, or determine what to do, or some way to clear cache or something since I think possibly the Catalina updates may have caused the issue and I'd prefer to try to clear up software issues before attempting to replace the hard drive.
Ad

-Which model 2017 iMac - 21.5 or 27-inch, Retina or not?
-What type of drive is in the iMac - 1 TB (5400-rpm SATA), 1 TB Fusion Drive, or 1 TB flash?
-Are you getting any errors/kernel panics?
-Which applications are open when the issue occurs?
-Do you have any third-party utilities like MacKeeper or antivirus installed?

You can check the logs using the Console application, which is in the Utilities folder.

I think it has the stock 1 TB Fusion Drive, but that's just a guess based on the fact that it has previous users on it going back to 2017, and on what I've read about the Mac.

-Are you getting any errors/kernel panics?

Yes. When any errors popped up, they say something about a kernel panic with WindowServer, or keychain, or an app tried to access something outside of security restriction (I think it's tied to some Gatekeeper issue after my Catalina update, but I couldn't find a virus with CleanMyMac X trial).

Specifically when it happens, the bottom Dock will go black, things will freeze (except for the mouse pointer), then the screen will go black but I can still use the mouse pointer... and then it'll just sit there until I hold down the power button to force shut it off. I've gone through Safe Boot (cache clear), parm cache reset x3, Recovery options (however, my Time Machine stopped saving to the USB drive, and now Recovery is saying that Catalina is saving "snapshots" to Macintosh HD... which apparently is a Catalina feature since update but it just looks like a mess to me now).

I'm afraid of losing things I need that would be unrecoverable in some app if I try to reinstall the OS (I'm new to this on Mac but not Windows). 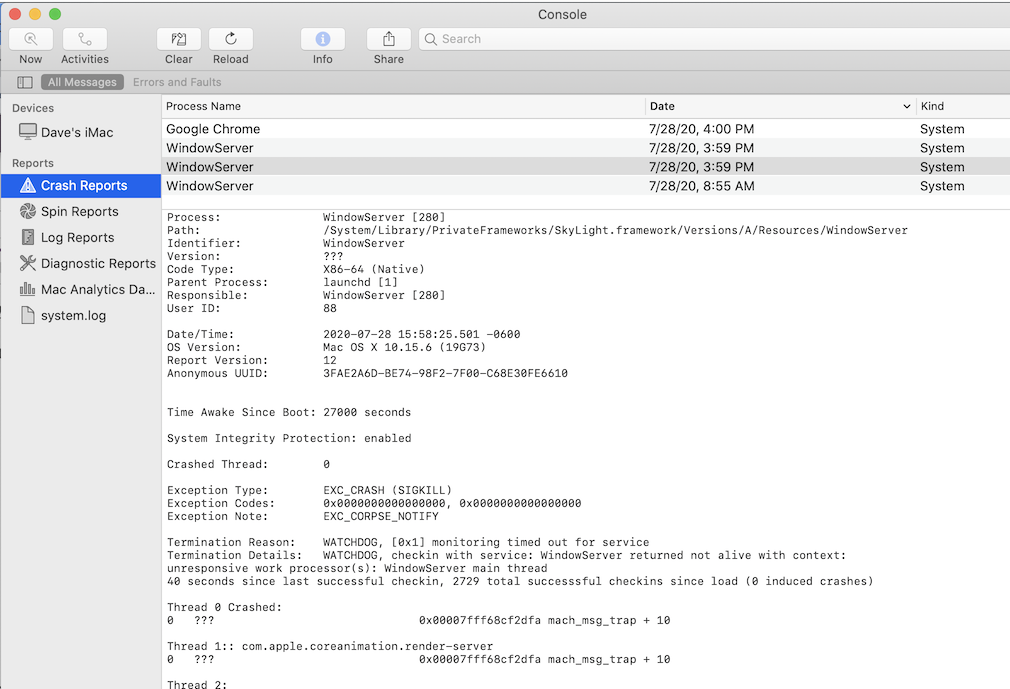 I'm having trouble uploading the screenshots of the other ones:

I think the Chrome fail is due to the kernel fail. I'm not seeing any rhyme or reason for the crashes other than "WindowServer", however that works.

-Which applications are open when the issue occurs?

Chrome this time... but others previously. I use Chrome the most, but I'm a web developer so I use a lot of apps related to that too.

-Do you have any third-party utilities like MacKeeper or antivirus installed?

Sure, but I'm not familiar with the ones installed before me. Everything was fine until a few weeks ago, and I didn't install anything new recently. I uninstalled a bunch of apps by trashing them from the Mac and my User Applications folders, and also through CleanMyMac (which was recommended to me by coworkers and my boss).

I have four pages of apps, I use maybe one page's worth of them, and I guess I could try uninstalling the rest, but the problem appears to be kernel panics from WindowServer or a hard drive issue, and I'm finding no real indication of a hard drive issue after running diagnostics.

You can check the logs using the Console application, which is in the Utilities folder.

Thanks, see above.
M

Crashed again 10 minutes ago... looks like on different executables or services, but similar errors.

I don't know what to look for or do here. I can't tell if the issue is software, RAM, hard drive... I was doing something completely different here than yesterday. I'd like to just reinstall Catalina from its current version but it seems that would wipe files outside of the OS; maybe I'm reading something wrong. I can't tell.

I hope nobody's getting overwhelmed by the data I'm leaving, but I think it's necessary so far to investigate this. 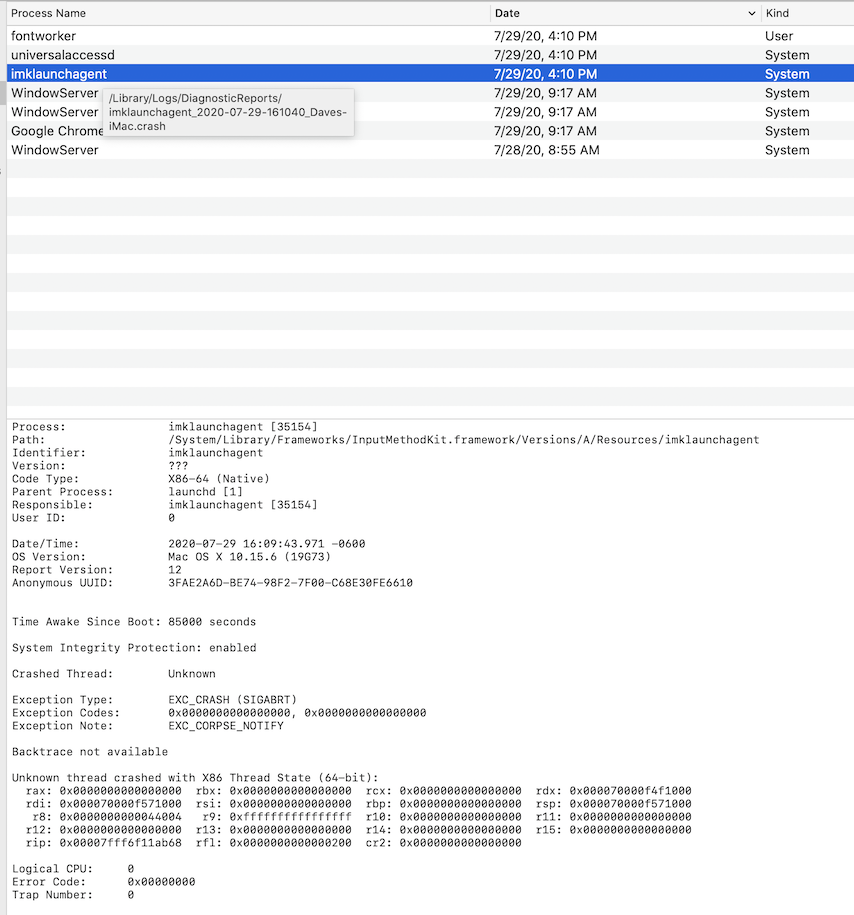 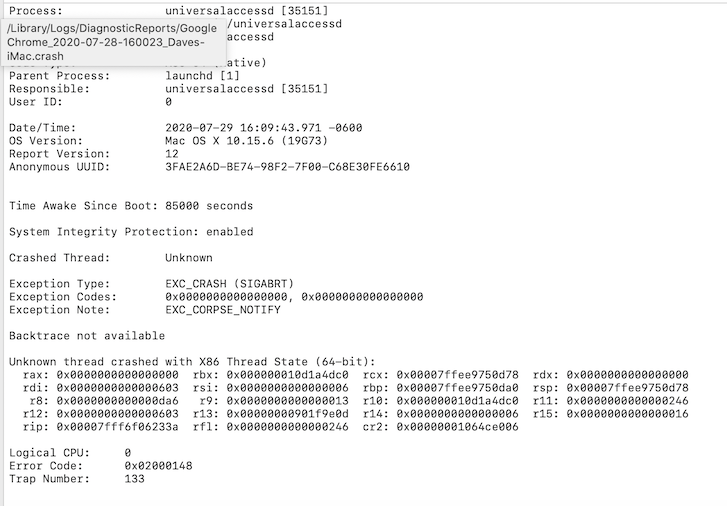 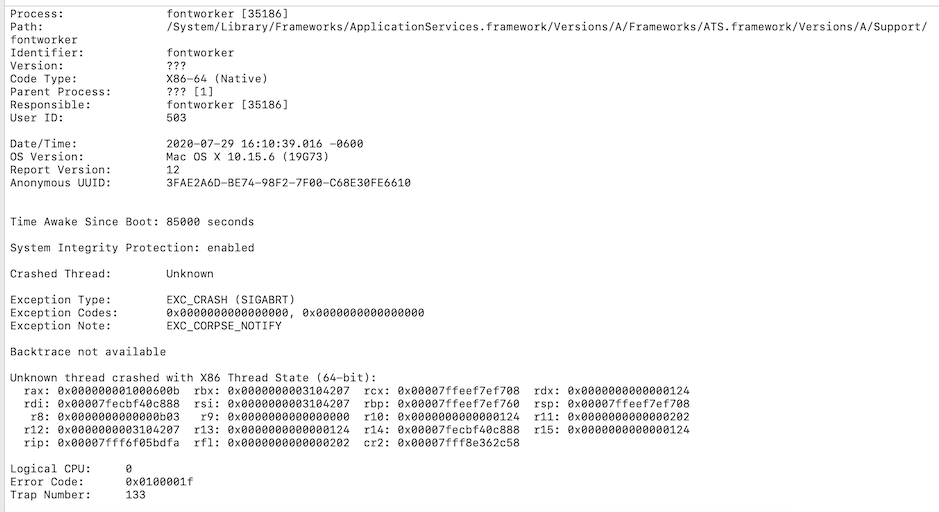 -Yes, that is an iMac (Retina 5K, 27-inch, 2017)
-Sounds like a 1 TB Fusion Drive
-Most of the crash stuff sounds like macOS-related processes

I would probably find a drive to create a full Time Machine backup or clone of your data first. Always better to be safe than sorry.

It may be good to download and run EtreCheck (you don't need to pay for the Power User feature upgrade. You can then post its report here. It will do a full analysis of your system, and identify any issues that may be causing the crashing.

Hi, thanks, I tried EtreCheck, it looks pretty good; I was going through the data earlier this week, removing some things, and I will upload the data when I've had a chance to understand it, but in the meantime I captured the Mac error pop-ups that usually happen, which may be a better quick indicator of what's happening (I'm still not convinced it's a hardware issue).

There's a lot of information to go through in EtreCheck, and I don't want to turn people off or introduce a bunch of red herring rabbit holes, but here's the "Major Issues" section:


Code:
Cory Cooper, I'm not quite sure what you're looking for. This may have been completely normal before the crashes or Catalina.

I need to find relevant reasons why the crashes are happening, such as what path to go down with error reporting (like with the Console app), and I think it would be better to investigate actual errors related to the crashes than every possible thing that could look odd in the system.
M

Sorry for the delay in response...

The Unknown Caller error is kind of a mystery, as it can be caused by several things. The easiest fix to try is:

-Power off your Mac
-Press the power button and immediately hold the Shift key down until you see the Apple logo/progress bar
-Let the Mac startup into Safe Mode
-Once that is complete and you see the Desktop and the words Safe Boot in red in the menu bar, click  > Restart from the menu bar

Note: It can take several minutes to startup into Safe Boot mode.

Let us know if that fixes those errors, and we can go from there.