I have a MacBook Pro, bought January 2014. Recently it repeatedly gives me the spinning beachball and stops flat for 30 seconds or more. Activity Monitor doesn't show anything taking up much memory, it just shows the application I'm using (Finder, Notes, Thunderbird, etc) as "not responding". Eventually it rights itself, but it's annoying.

I thought it might have something to do with repeated synching of an active Google Drive I have on the desktop, but even when I disconnected that, the beachball pauses still happened.

I have about 35GB of free hard disk space, but even when it's been less than that it the past, I didn't have this problem.

Anything else I should look at? I can't really afford to buy a new one right now.
Ad

- Don't believe it's a Retina. "About this Mac" just says it's an LCD. 13 inch.
- OS X 10.11.6 El Capitan
- No third-party utilities
- Yes, Dropbox and also, as I mentioned, Google drive. But I've had these connected for years and the problem only started happening yesterday.
- Firefox is pretty much always open, so yes

Normally, the SBOD (Spinning Beachball of Death) is a caused by a failing drive/drive cable, not enough free space, incompatible software, ad-blocking in browsers, or excessive load on the system from real-time scanning of utilities or background processes like cloud-syncing.

Try some of those steps and let us know that information or if they help,

I'm attaching a screen shot from Console. Does any of this mean anything to you?

I don't use ad blockers. I tried shutting down Google Drive and Dropbox and it didn't help. Could it have something to do with the hard drive? I learned a while back that it's become swollen - it's under the trackpad and you can hardly push the pad in anymore to click on stuff. (I bought a mouse.)

Sometimes this doesn't manifest as the beach ball. Earlier this evening I clicked in a Google Docs document. I tried to paste something, and the cursor just sat there and blinked for 20-30 seconds before it pasted. No beach ball. The computer was just unresponsive.

Nothing the report sticks out other than the mention of low-space thinning. Normally, that means there is a very low amount of free space, but you mentioned you have about 35 GB free, so that should be OK.

The swelling that is causing the trackpad issue is actually the battery, not the hard drive. That shouldn't cause the hanging issue you are experiencing, but it will cause the trackpad to be unusable.

It may be good to try opening the Activity Monitor application to see if any processes are maxing out the system. Make sure you click View > All Processes in the menu bar, then click the % CPU column to sort then in descending order: 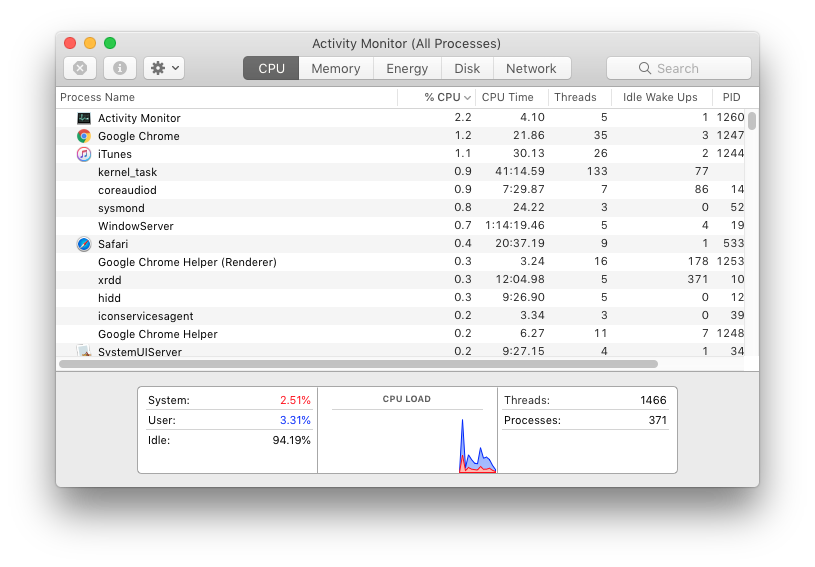 Let us know what that shows.

As I mentioned in the first post, the Activity Monitor doesn't show anything hogging memory.

A weird thing is that, when the problem slows down things loading in Chrome, the browser gives me a "Page unresponsive" message. But it's NOT an internet connection problem.

I've got a Mac-affiliated repair shop appointment in an hour. Will let you know what they say.
Ad

Well, as you pointed out that I'd misremembered, my battery has been going bad for a while. Now my hard drive is also going bad - that's what's causing the problem. So my choice is to either spend $350 to get them both replaced (unacceptable to have to go days without my Mac, because I use it for work) or get a new one. I'm probably going to have to go for the latter - I'm just steeling myself for the expenditure now....
You must log in or register to reply here.