Is there anyway to tell when a usb was disconnected? Does the computer keep a sort of history?

I understand that you can somehow look it up in the console or terminal? Please help.
Ad

The easiest way is to see if the Finder shows the USB device. If not, assuming there is nothing wrong with any of the USB ports, there will be nothing shown.

Finally, one can launch Disk Utility and it will show all connected "devices" to your applicable ports (along with the internal drive).
A

Thank you! The thing is I misplaced the flash drive, so i'm searching for the time that the drive was disconnected to trace my steps. I thought I could look it up in the console..

What version of OS X?

Using the Console app, you might be able to find it. It depends on how long ago you unmounted it. You can search in the Console app for unmount or the name of the flash drive, if you click on your Mac in the Devices list, then use the search bar in the upper right.

How long are "unmount" events kept? Less than 48 hours ago, I unmounted both of my external drives (actually SSDs) from my Mac Mini, but when I followed your instructions, nothing showed up. Similarly for the Flash Drive I unmounted yesterday morning. Also, I just did it again with one of my flash drives, but still nothing when I enter unmount in the Console application.

Just out of curiosity, what exactly does unmount mean? Whenever I disconnect an external device, like either of my external drives or a flash drive, when I get the dialogue about the "disk" not being ejected properly (seems like a strange message), I click the Close button.

Update: When I entered "How to use the Console application on a Mac to see unmounted devices" in google, here is one of the (detailed) "hits" that came up:

I think most logs are archived after 24 hours.

If you are getting that error message, then it sounds like your aren't ejecting the properly and letting them unmount. You can't just unplug them from the port without dragging the icon to the Trash to eject/unmount it first. Sorry if you are doing it properly, if so, then there is another issue.

OK, I just did it properly with a USB Flash Drive, ie, after I plugged the device into one of the USB ports on my Mac Mini, I dragged its icon to the trash. No message appeared, and I then just pulled out the Flash Drive.

But, the unmount command within the Console application still did not show that device as being unmounted.

By the way, when I was doing it previously (ie, just unplugging the device from a USB port, with the associated error message), does that cause any issues?

Do a search in Console for the mounted name of the USB flash drive. Click on the icon of your Mac in Devices section to highlight it, then use the search box.

Yes, if you have been just unplugging them without ejecting/unmounting them, you have been lucky so far. You can cause severe directory corruption, and even render some drives unusable, by not ejecting them first.

Why and how to safely eject media drives from your Mac

One would think the Console App would retain the names of "unmounted" devices. For Flash Drives, given that I use them "temporarily" (except for the one I have connected to a USB port on the hub for our Samsung SMART TV), I rarely, if ever, give them a name. Even if I did, I don't think I would remember the name (unless it is something really unique).

Regarding unmounting devices, I never "unmount them" (ie, pull the USB cable for the device from a USB port) while an operation is going on. I always wait until the end. Given that I run Tech Tool Pro every week to have it rebuild and repair the Main Volume's directory for each of my Macs, I guess that's one reason why things have been OK. But I do that before I do my SuperDuper! backups to the two external drives (Samsung SSDs), and then unplugging them when the backup is complete (and getting that "error" message).

But I think I'll run the Volume Rebuild right now, just to be on the safe side. And I will make a concerted effort to first drag a device's icon (external drive or Flash Drive) to the Trash first, before disconnecting the device.

Thanks, Cory, for that advice.

Strange you don't see the drives in Console...I see mine. I just mounted a USB flash drive named potpourri, ejected it, and this is what Console shows:

Remember, even after a process with an external is done - i.e. a file copy, the mechanism takes a little while to come to a "resting" point. Also, Spotlight will index any changes when things are idle. That is why you should always eject/unmount first, wait a couple of seconds for mechanical hard drives to spin down, then unplug/disconnect the cable.

Well, it's still not working for me. I first named one of my Flash Drives "Temper", then copied a file to it, and ejected it properly. Similarly, I plugged in one of my external devices, and it contains 3 Volumes. When I ejected that "device" correctly (actually, I moved one of the Volume names to the Trash, and then I got a dialogue as to whether or not I wanted to Eject All, which I chose). I still got nothing in the Console application.

A couple of things:

1. I have disabled Spotlight, preferring to use EasyFind.

2. In the Console Application, whether I have the flash drive/external drive plugged in or not, I can only "see" the device entitled ""My Real Name" 's Computer".

Is the Console app tied to Spotlight, and/or vice versa? Also, does it make a difference how a device/volume is formatted?
Ad

You won't see external drives mounted in Console. Here is a screenshot the results of my directions above: 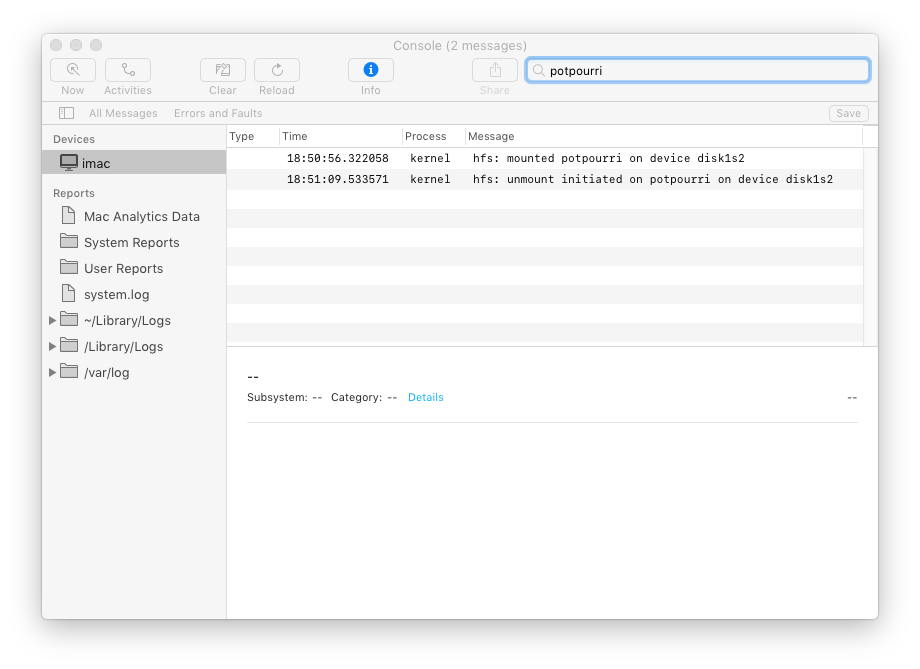 The Console app is not tied to Spotlight. Spotlight is always running in the background, and indexes any changes to files/drives when the computer is idle.

Thus a flash drive would be considered an external drive, correct? If that's true, then that explains why the Console app can't "see it". And thus it would not help the op with trying to find his flash drive.

For clarification, the Console app will not list it under the Devices section when it is mounted, It should track mounting/unmounting events in the log though.

My iMac is running Sierra, and I know your Macs are running High Sierra. I wonder if there was a macOS change? I will test that later today and let you know.

I right click on the desktop icon of the drive and select eject, quick and easy.

For clarification, the Console app will not list it under the Devices section when it is mounted, It should track mounting/unmounting events in the log though.

My iMac is running Sierra, and I know your Macs are running High Sierra. I wonder if there was a macOS change? I will test that later today and let you know.

Thanks, Cory. It seems that using High Sierra is, in a number of respects, a step backwards. On my new mid 2017 13" MacBook Air, I am forced to use High Sierra, per Apple's policies.
Ad

Pasquanel said:
I right click on the desktop icon of the drive and select eject, quick and easy.
Click to expand...

OK, thanks. I'll try and remember that. And as James Whitmore said in the excellent movie "The Shawshank Redemption":

I've heard you recommend ClamX AV so I gave it a trial run this morning, it seems to take quite a long time and after 20+ min. I noticed my mini seemed quite warm (185F/85 C) fan is loafing along at about 1900 rpm.
Data on what is safe or acceptable is rather sparse, I can find opinions but nothing from a reputable source.
What do you think?

I really did not take notice of any heat issues on either machine, and I let ClamXav scan each machine "from the top", ie, scanned each machine's entire SSD. The specifics of both my machines are:

I am running OS 10.13.4 on both machines, and as I suspect you know, I keep my machines "lean, mean, and clean". Regarding the fan, when I run Tech Tool Pro on my normal weekly basis (typically on Saturday), one of its features is to test the fan. For the MacBook Air, it gets up to a maximum of around 6500 rpm or so, but for the Mac Mini, only up to around 4900 rpm or so. I've always wondered if it is possible (and worth it) to put a "stronger" fan inside the Mini.

I have ClamXav running on my MacBook Air as I write this, and if I get the chance, can run it on the Mini. By the way, how did you "see" that fan speed while ClamXav was running?
Ad

Pasquanel said:
I've heard you recommend ClamX AV so I gave it a trial run this morning, it seems to take quite a long time and after 20+ min. I noticed my mini seemed quite warm (185F/85 C) fan is loafing along at about 1900 rpm.
Data on what is safe or acceptable is rather sparse, I can find opinions but nothing from a reputable source.
What do you think?
Click to expand...

I know I "kind of" answered this above, but a few more comments, and an update, would be beneficial.

First, the scan completed on my MacBook Air, and the machine was not warm at all.

Secondly, I have mentioned in the past that the "higher" the level one picks for ClamXav to scan, the longer it is going to take.

Third, it should be obvious that there are other factors involved with how long ClamXav takes: size of the internal device, HDD versus SSD, rpm of the HDD, how "lean and clean" the HDD or SSD is, etc. As I mentioned above, the 2 SSDs I have are not huge in size, and for both of them, I am utilizing about 30 to 35% of the available space. But even though my SSDs are "lean, mean, and clean", scanning "at the top" with ClamXav still takes a good amount of time.