I have a 2TB external hard drive that has 3 partitions on it. Two of them, "Time Machine" and "El Capitan" are of type Mac OS Extended (Journaled), and the other one "New OS" as of type AFPS.

I want to remove the "El Capitan" partition and expand the "Time Machine" partition into that space. This is what Disk Utility currently shows: 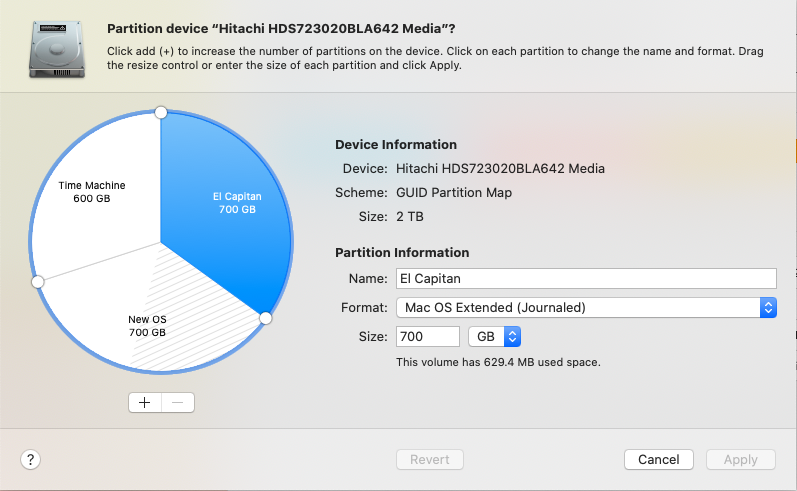 Clicking on the "El Capitan" partition and pressing the Delete button causes the following display: 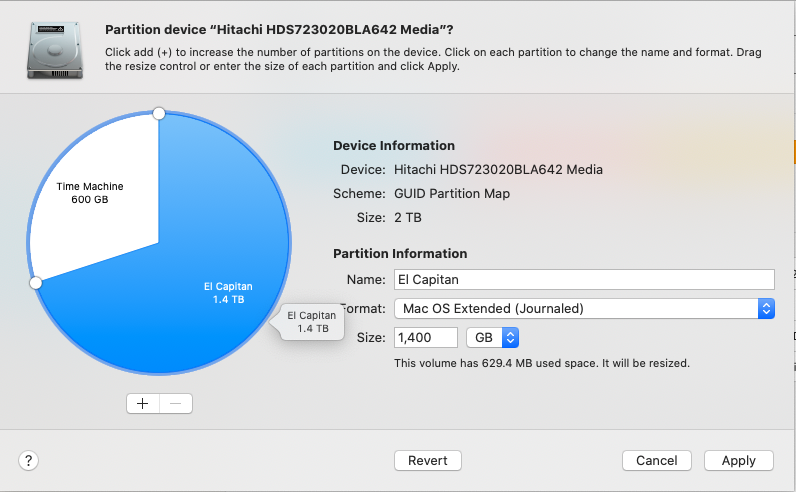 This is, of course, not what I want to do. I've tried unmounting the disk, ejecting the disk, ejecting the volume the disk is on, and nothing works - either I get the screen above, or the system beeps at me as if I weren't allowed to do this. I do have administrator rights. I was using Disk Utility on another volume earlier without incident, so why I can't get it to work now is beyond me. Even tried rebooting, but still no success.

Can anyone please tell me what I'm doing wrong?

I decided not to wait for an answer, as this was posted Saturday night, so it would likely be Monday before anyone saw this, IF they saw it then. So, when a little hammer doesn't work, you get out the big hammer.

There was nothing on that 2TB external that wasn't recreatable, so I got the idea to click on the "Hitachi HDS... Media" disk and do an Erase, which worked. THEN I was able to repartition the drive into a 1TB Time Machine partition and a 1TB Catalina Backup partition. This now makes my Catalina backup partition the same size as my boot volume, and puts the Catalina boot volume and backup volume on different physical drives.

So, then I just Carbon-Copied my Catalina boot volume to Catalina Backup, and then ran Time Machine to establish a baseline for subsequent backups, and all is good.

If anyone has a clue as to what my original problem may have been, I'd still like to know.

This all started when I realized I had a single point of failure in my system. A while back I installed Catalina on an external disk, and when I had the system built and software installed/updated, I SuperDuped the external image to my Mac mini internal hard drive and rebooted. The Mac mini was a mid-2014 model with an HDD spinning at 5400 rpm, and very little cache; the external disks are G-Tech running at 7200rpm with 64MB cache and a USB3 connection. The system ran so poorly and so slowly off the internal HDD that I eventually decided to boot off the external drive and use the Mac mini HDD as a bootable backup. Well, that was OK for file recovery, but then it dawned on me that if I lost my Catalina external disk, then my only recourse was to boot off the Catalina Mac mini HDD, which really wasn't an option. Thus, I decided to create a bootable Catalina backup on my other external hard drive, and then I reverted the HDD in my Mac Mini to MacOS Extended Journaled filesystem and restored El Capitan to that disk. Now I at least have a bootable functional macOS on the Mac mini HDD, so I can at least get/receive email and do stuff on the web, and if I need a functioning OS to build a newer system, I have one.