Hello folks,
I'm new to the forum after having trouble with my Macbook and the service at Apple. I joined up to get some objective feedback on my situation and to hear if anyone has any advice or has had the same issue.

Backstory is that I purchased a new 13" Macbook Pro from Apple in Perth, Western Australia, about 5 months ago. I was really keen to upgrade my trusty 2014 model so got the new one. I set it up and after a few days from new started to have wifi issues. It would drop out, not connect, not see my hot-spot connection even though my parter sitting next to me with her Mac had all of the above working. I contacted Apple online and went through diagnostics and was told to keep a record of when it happened. I did this and over the course of the next few weeks the wifi actually got better.

I went on enjoying my new device until about a month ago when it wouldn't wake when I opened the lid, and the trackpad wouldn't click or wake the machine up. The next morning my mac surprisingly was working again andI continued to use it until last night when the above happened but it never came back on. I booked in with Apple for a genius appointment,I was told that the new chip did this, he had seen it before and would open it up to check.
When he returned he told me I'd spilled liquid on my laptop and it had fried the wifi chip along with another key component and that's why it was no longer working and he couldn't do any more as it was not covered under warranty so I should pay the $1100AUD to fix it.

I was confused as I hadn't spilled liquid on or near it, I keep it in my room and have no pets or other humans around who could have done it. And although Perth has just gone through winter, I never had it out in the rain. I explained and the employee was kind enough to guide me through his position being limited, he showed me a photo of the inside of my laptop and said that's all he could do. I asked for a copy of the image but was told no, but I could use my phone to take a photo of his screen if I wanted. Photo will be below. So that's my story, if I'd have accidentally damaged my mac, I'd hold my hands up but as I know that within the last few months I have treated my brand new tech with nothing but care, I'm shocked at how this could have happened, and how limited the support is. I see from their side that if everyone simply said they didn't do it, then Apple would be out of business, but I can't afford to not have help with it as I know it's not something that has been done.

What's getting me is the time between me reporting the issues with it originally and now it's finally breaking seems too long. If I spilled fluid on my Mac, surely it would be toast by now?
Any help is greatly appreciated, and let me know any helpful info that could put me in the right direction and/or clear my mind on the situation.
Cheers 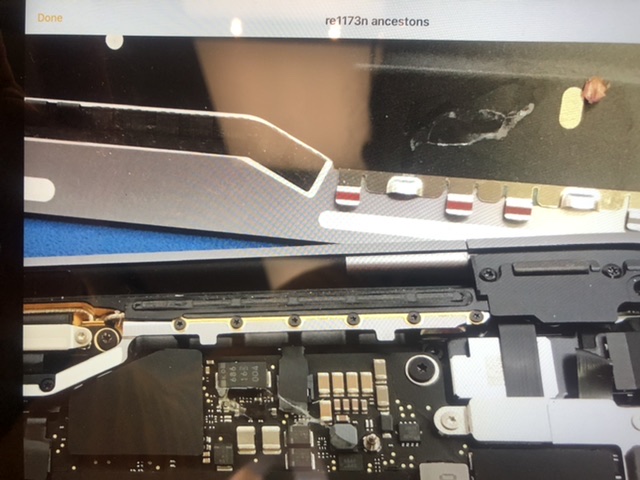 From what I can see, it does look like liquid damage to me, as I believe some of those tabs that have the red stripe on the bottom case are liquid sensor indicators. It also looks like dried liquid just above them. Hard to tell for sure from just a photo, as there are other liquid sensors on the logic board around the Wi-Fi card that cannot be seen in the photo.

In my experience, if they have been tripped, it is indeed a sign of the presence of liquid. I am definitely not siding with Apple at all, but the employees have nothing to gain by falsifying their findings.

When liquid is introduced into the Mac's case, it can work for quite a while before corrosion sets in and hardware starts to fail.

Sorry there isn't much more I can do without seeing the Mac in person, but I hope it turns out well for you.

C
You must log in or register to reply here.