I have a folder full of photos, raw dng files (actually it's a raw dng movie sequence).
The files are numbered, the files have the same prefix followed by "_frame_000000.dng" and the six digit number counts up every file.

Now I want to (automate the process of) selecting the first 16 dng files in this directory (so file *_frame_000000.dng to *_frame_000015.dng) and drag it to the app Kandao raw+
(Kandao raw+ is an app that aligns and averages multiple raw files in order to reduce noise ( https://www.kandaovr.com/download/ ))
Ideally the app is already open at the beginning screen and the automator drags the first 16 files from the folder to the app.
After that I want to automatic select another 16 dng files from this folder, now 1 count up, so file *_frame_000001.dng to *_frame_000016.dng and drag these on the Kandao raw+ app.

and so on and on, until it reaches the last file group of 16 images in the folder.

Is this possible in to automate and if so, how could I accomplish that ?

To give a better impression what I want to automate, here's an example screen recording, doing it manually. 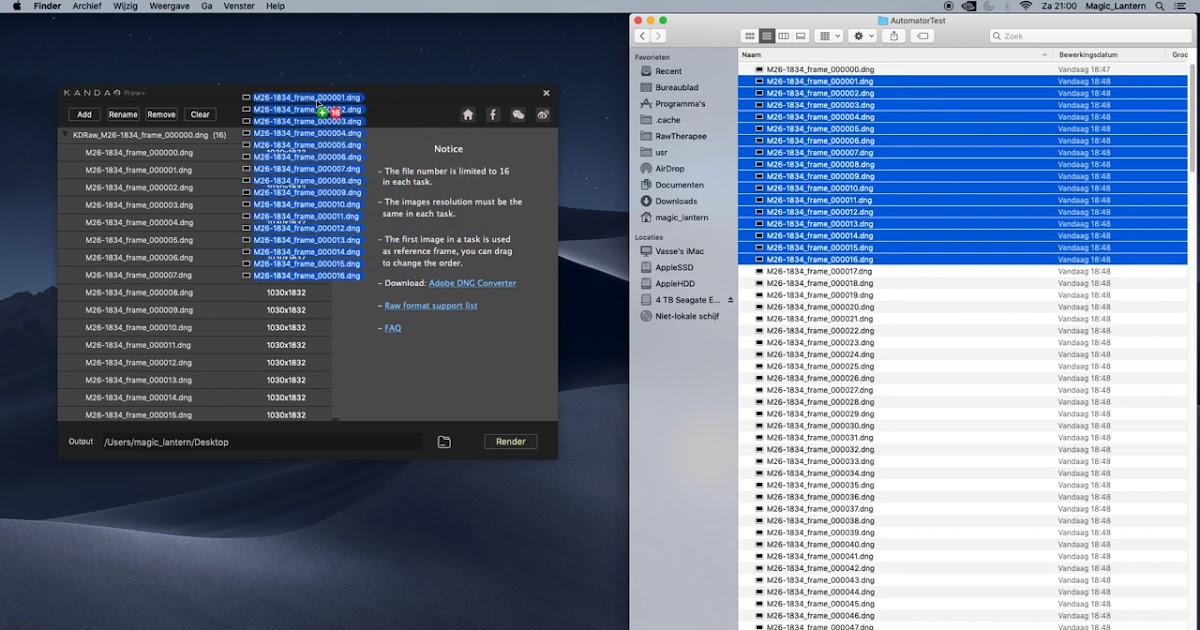 This should be manageable with automator and/or applescript as opening files in a particular application is very simple, the hard bit would be setting up a loop or loops to select the blocks of files. As Cory said in the other thread, MacScripter would be the place to ask.
L

I thought I give it one more try here, before registering add another forum.
But I guess there is no other way, so I just registered at MacScripter.
Thanks for the help

I am a little busy at the moment, when I have some time I will give this a go.
Ad

No need to rush, it would just be something that would be nice to have, no lives depending on it ;-)
When I'm able to post at MacScripter, I will ask the question over there. (Can't post until registration is fully done)