Why are my TimeMachine backups 3-4 times the size of the original source?

I have been using TimeMachine for backups of all 4 of my Macs for years. Suddenly (or at least it seems suddenly) I find that my TM backups are 3-4 times the size of the original source being backed up.

I recently upgraded all but one of my Macs to Catalina. I doubt that this is relevant to this problem. But who knows? In an attempt to organize my TM backups I decided to start from scratch. I have 5 different TM backup destinations ( 2 Time Capsule internal drives, 1 external drive connected to one of the TCs, my Synology Disk Station Time Machine destination, and an internal drive on my old Mac Pro that I use as a TM backup drive). I erased all previous TM backup data from these drives.

To make this as concise as possible I will say that I've tried multiple variations of TM backups with all of my Macs to the various TM destinations. In each case I have first gone to the time machine preferences and excluded everything for back up except for the start up drive itself. For example, on my iMac when I have done this, Time machine preferences estimates that my backup will be 282.65GB. Since my TM backups represent a full first backup the process of backup takes a very long time (48 hrs. +/- a few hours). In the case of my iMac when the process of the first backup is completed I am shocked to find that my 282.65GB of data took 980GB of storage space on the backup. I have repeated the TM back ups on each of my 4 Macs to each of the 5 TM backup destinations with basically the same results- the TM backups are 3-4 times the size of the original. The ONLY exception to this is that when I did a TM backup from my iMac to my Synology Disk Station, the size of the backup on the SDS was only moderately larger than the estimate in TM preferences (Time machine preferences estimated the backup size to be 295.26 and the actual size was 334.61).

Is anyone else experiencing this? Any ideas how to troubleshoot this or fix it outright? Thanks.
John
Ad

Hmmm..that is a curious issue. There will be a slight variation in size, due to the differences in the disks in your Mac versus the TM destination - i.e. block size, hidden files, etc. But, the TM backups should definitely not be 3-4 times the size of the Mac being backed up.

As you mentioned, I wonder if it still may be part of the Time Machine settings themselves. If you start a TM backup with external storage devices connected, the default settings will back those up to TM as well, unless you manually exclude them in  > System Preferences... > Time Machine > Options... > Exclude these items from backups. If you did exclude them as mentioned, then that will need further investigation. That could possibly explain the data size mismatch.

Also, you stated you "erased all previous TM backup data from these drives". If there is nothing left on them you may try actually erasing/reformatting the drive before starting a new TM setup on them. Of course, you will lose any other data stored on them by doing that.

It may help a bit to get further explanation of the Macs and their TM machine destinations. Personally, I wouldn't rely on the Time Capsule drives, or USB drives attached to them, as they are known to fail. As far as the Mac Pro, is it being used to backup itself - i.e. one of its drives are backing up the others internally from the Mac Pro. Or, is it setup as a TM destination for other Macs via your network? Also, it sounds like 4 of the 5 Macs are doing a network TM backup to the Time Capsules, Synology, and Mac Pro (possibly)...is that correct?

I have found that a single, large capacity destination works best for using TM over the network. And, individual external drives for each Mac is even more reliable.

Cory, Thank you for your thoughtful reply. I am rather meticulous in backing up my data. I learned the hard way. I lost some irretrievable photos several years ago due to lack of backup. I am trying to work within the framework of the hardware I have. For each of my computers I have a locally attached hard drive to do bootable backups. These drives are relatively small, just large enough to hold the backups. In addition I use TM backups on all computers. I must say that in practice the TM method causes many headaches. Both times I have tried to restore a startup drive from a TM backup were frustrating and ended in failure. But TM backups have saved me a few times when I needed to go find a badly needed file from 6 weeks ago that I had trashed. In trying to use the resources I have at hand, I am using one of the 3TB internal drives in my MacPro 2008 for backups. This computer has been extremely useful to me in running apps that no longer run on newer MacOses. I back up the MacPro to a bootable external drive (as I do with all of my other computers) and a TM backup to the same internal drive that I use for 2 of my other computers. For TM backups I have a lot of (unnecessary?) redundancy. Each of my computers is backed up to 3 different TM destinations. I figure that since I have the existing resources (Synology Disk Station, internal and external drives on Time Capsules, etc.) I might as well use them. My thought is that if I backed up all of my computers to one very large external source I will lose all TM backups in the event of a drive failure.

But back to the original problem. I've made little progress in getting to the cause for the large size of the backups. As we've discussed, I've ensured that I have excluded everything from backup except for the startup drive itself. After the backup completes, when I "enter time machine" and peruse the backups available for restore, the only thing that shows up is the contents of my startup drive. So, I don't think TM is mistakenly backing up other data. It is as though there are uncounted "invisible" files residing on my startup drives that are getting backed up and consuming storage space.

I have been using TM backups for as many years as Apple has made them available. And I've never experienced this behavior before.

I apologize for this long response. I appreciate the time and effort you have expended in trying to help me.

No worries...I will continue to research it and let you know if I have any additional suggestions.

Let us know if you find anything out as well.

That's VERY kind of you. I will certainly repost any new information or a solution if I stumble upon it.
J

Cory Cooper said:
No worries...I will continue to research it and let you know if I have any additional suggestions.

Let us know if you find anything out as well.

Cory,
I think I have found something interesting. I'm not sure how to put this all together. But I believe my DropBox account may somehow be involved. I have my Dropbox account set up to store files on their cloud. I have 1.03TB of data stored on Dropbox. But since it is mostly stored on the Dropbox cloud my Dropbox folder takes up only 198.2MB on my computer hard drive. When I click "Get info" for my Dropbox folder the get info box shows "Dropbox" at the top of the window and indicates that it is 1.14TB in size. In the body of the get info dialog it shows the size to be 198.2MB. I have attached some screenshots to demonstrate this. In addition, when I go to About this mac/Storage I get bizarre data. It shows that my Macintosh HD has 297.33 GB available of 468.93 GB. But in the bar graph it shows that "Documents" account for 1.14TB of storage space used. I wonder if somehow this explains how my TM backups are consuming such high quantities of data on the backup destinations? Any ideas? 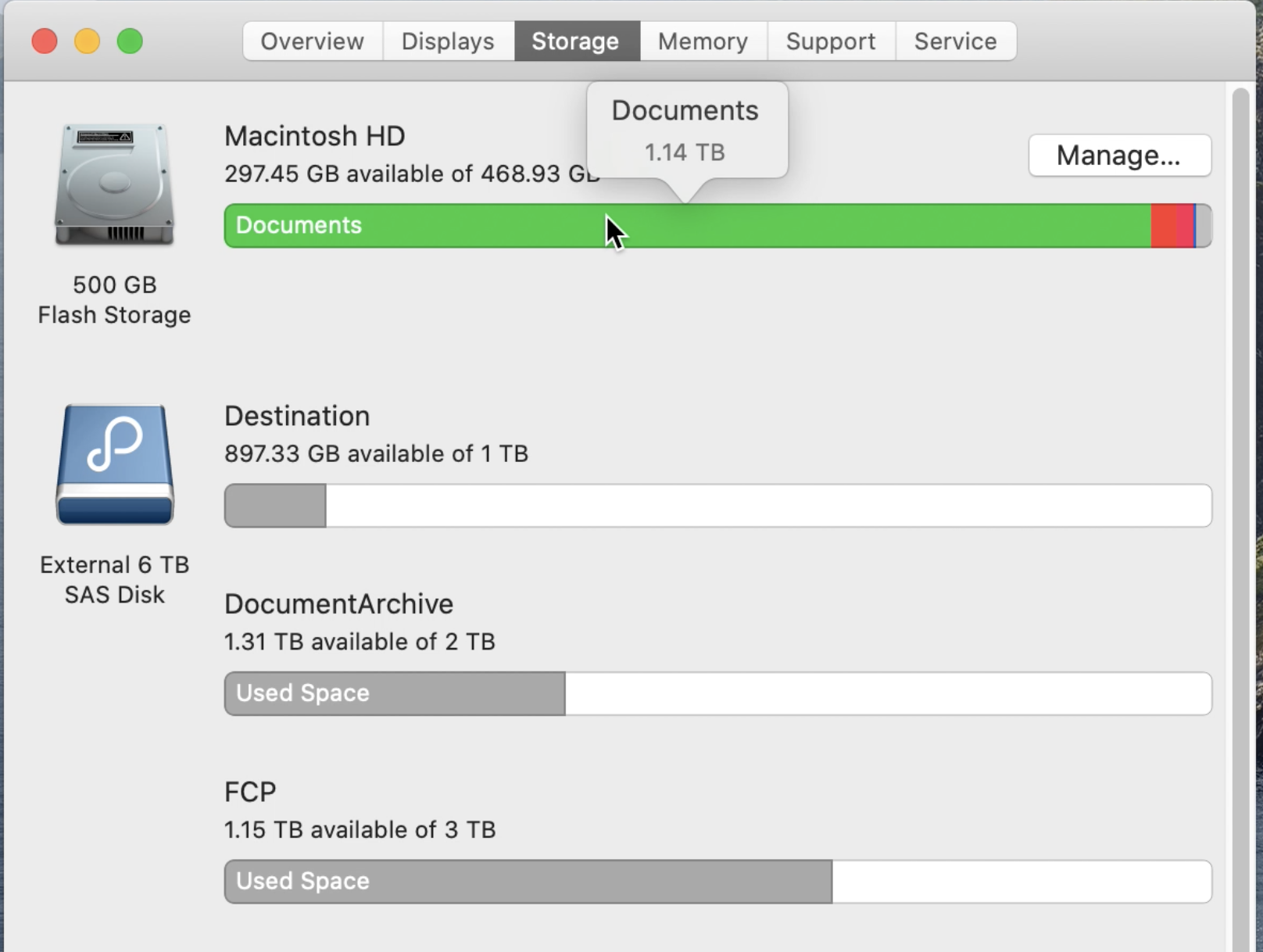 Hmmm...that is very curious. Strange that Finder would report a folder size that is more than twice the size of your physical drive. I wonder if there is any way it could be backup up some of the Dropbox files from the cloud - as it shouldn't. You may have stumbled onto something.

You could always verify all of your files/data are actually on Dropbox. If you are satisfied they are, uninstall and remove the local Dropbox files. Then see if the TM backup is more in line with what it should be.